Prometheus is a very popular opensource monitoring solution and it has changed the way that enterprises monitor their cloud-native environments. However, choosing the right plugins has been haphazard but no more – enter PROMCAT.

For the uninitiated a little bit of background on Prometheus. Prometheus is a popular open-source system monitoring and alerting toolkit originally built by the team at SoundCloud. Since its debut in 2012, many companies and organizations have adopted the solution, and the project now has a very active developer and user community. Prometheus joined the Cloud Native Computing Foundation in 2016 as the second hosted project, after Kubernetes.

However, with the growth of the resources that Prometheus can monitor, it has become cumbersome to manage and filter the information to pick the diamonds from the dross. For example, there are numerous plugins for Kubernetes but how do you choose the correct one for your needs? How can you make sure that a plugin you found on Github is not going to bring your monitoring infrastructure collapsing around your ears?

This is one of the major issues that enterprises have traditionally had with open source software. Enter PROMCAT, a project sponsored by Sysdig. It is short for Prometheus Catalog and is focused on collating monitoring agents for Prometheus. You may have missed this, below is a copy of the tweet to announce the release. 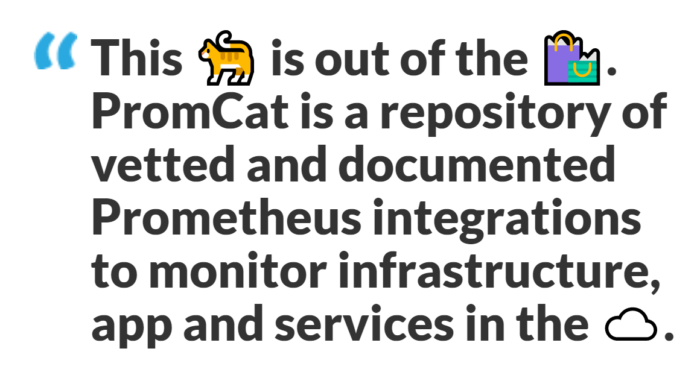 The focus of PROMCAT is to take some of the pain from choosing Prometheus plugins, separating what is actually a production-ready resource from what is still effectually a high school student’s DIY science project.

“So what!” I hear you might say, “I can do my own research!“. This statement, whilst correct, is actually flawed at its core. Why? Because, what Sysdig have done other than collating the disparate agents out in the field; is actually validated that the plugins do not bring your environment crashing down in a fury of fire and brimstone, corrupting your historical data or causing an outage. This means that you can select a monitor from the list of approved devices whilst being assured that you are not inserting a ticking time-bomb, or perhaps installing agent that has no real backing, other than a repository with a single contributor, based on the biased blog of their best friend.

I may be taking a slightly tongue-in-cheek stance and jesting a little bit, but in the world of Opensource software, there often appears to be so many different ways to undertake the same task. The noise to signal ratio is often slewed in the direction of they who shout the loudest rather than what is technically the best product. Doing your own research can become overwhelming, and it is difficult to decide what is good from what is a technical dead-end, and having a trusted advisor in our corner offering advice is never more needed.

So how do you use PROMCAT?

The why of using PROMCAT has already been discussed, and the value of having a service that will aid you in selecting monitoring agents that are not only tried but tested too is understood. the how is actually incredibly simple. This site follows the KISS paradigm to perfection. Navigate to the site, you have two options for searching, first the filter: 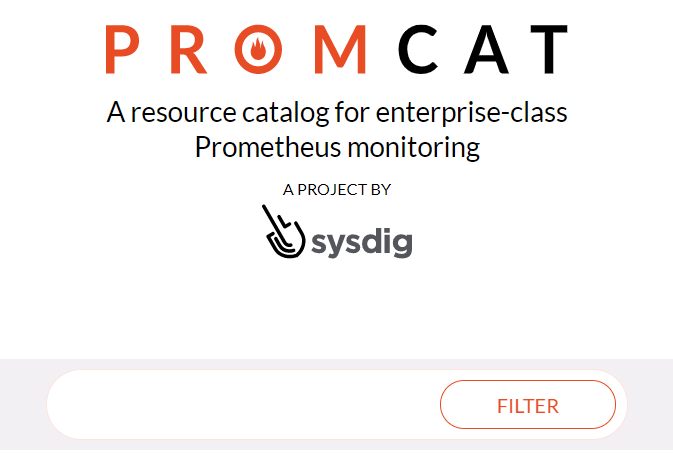 Here we can select against keywords for example “AWS EKS2 after clicking filter, you will be forwarded to a verified supported version. 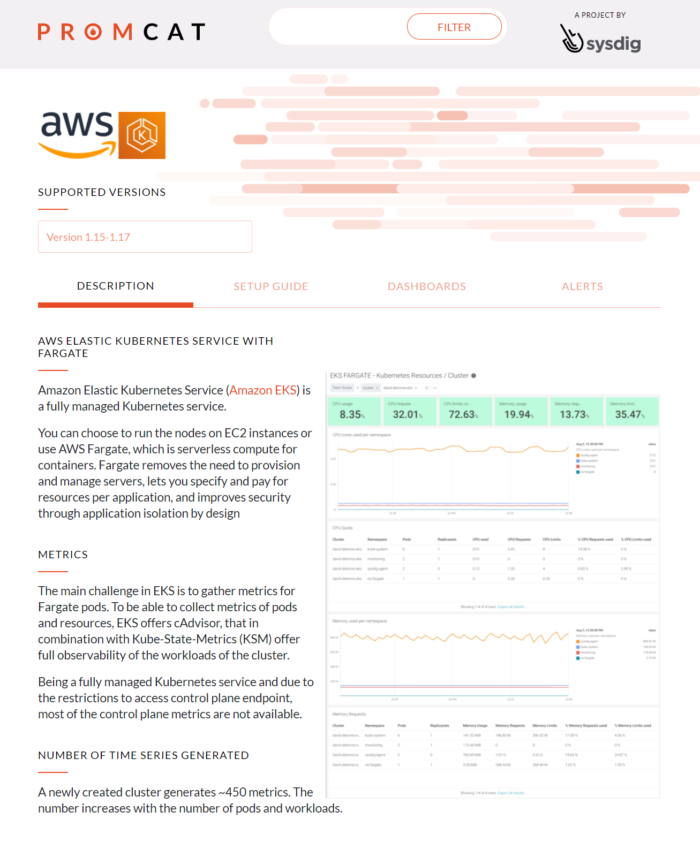 There is also the option to select plugins using a menu option, although not as flexible as the keyword search, it allows the ability to zero in on groups of plugins associated with a particular product.

There is only one thing that worries me about this project and that is that it could be perceived as selection winners and losers based on the bias of the overseeing company Sysdig, but Sysdig have covered this off by promising to support the community by contributing bug-fixes and improvements to any approved plug-in as a part of their maintenance and support of the core product Prometheus.

Sysdig have initially launched with support for Kubernetes control plane, Istio service mesh and a number of key AWS services. They have also pledged to support an ever growing list of AWS services, together with other cloud-native environments.

From the perspective of DevOps with a big Dev and little Ops this project may seem odd, there is no Git Repositories now CI/CD workflows, but if you look at this from the perspective of little Dev and Big Ops, this is something that the community has been crying out for. For the people that are assigned day one and two operational control of the infrastructure and application stack, monitoring is a very important part of their day to day processes and is a major weapon in their arsenal to enabling good service to their customers. They really cannot afford to have untrusted agents in their environment, they need to be able to trust their metrics. It is to those teams that PROMCAT is aimed, and rightfully so as they will gain the most benefit. It also moved Prometheus up a notch or two as an enterprise monitoring solution. All in all a very good OSS project.

GitPod is the new developer experience