And fly, those pigs do. Oracle, at their OpenWorld conference last week, announced two major VMware integrations: Oracle Cloud VMware Solution, a way of running VMware Cloud Foundation inside Oracle’s cloud, and support for Oracle software running on VMware, regardless of where (including existing on-premises).

This service is different from original ‘VMware on the Cloud’ service, VMware-on-AWS. With the AWS service, the solution is managed (and sold) by VMware. With the Oracle solution, similar to the Google and Microsoft services, the service is unmanaged and much more ‘open’. This allows customers to run VMware on OCI, without changing any operational processes, using existing VMware management tools. 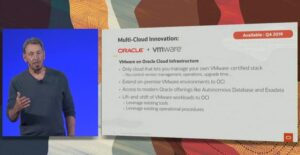 Additionally, it is not a managed service. Customers get full control over the VMware solution running on OCI, including administrative access to the underlying physical servers.

They get to install and configure the solution to be compatible with their existing datacenters. Notably, this leaves customers to patch and upgrade environments on Oracle themselves. While an operational burden, this is a good thing for compatibility with the existing datacenters. The VMware clusters running on OCI can be added to existing vCenters for single-pane-of-glass management.

On the VMware side, Oracle Cloud VMware Solution will include VMware vSphere, NSX-T and vSAN using a VMware Validated Design (VVD) architecture and on VMware certified hardware.

The solution will be sold and supported by Oracle and its partner community. Oracle becomes a partner in the VMware Cloud Provider Program.

The companies said the service is expected to go live in the first half of 2020.

With a VMware solution running on OCI, Oracle had no choice then to discuss supportability of Oracle running on VMware. Historically, Oracle and VMware have been fighting over the support of Oracle databases on top of VMware virtualization platforms.

The newly announced partnership will explicitly support Oracle products running on VMware. This will include support environments outside of OCI, including other public cloud services for VMware and most notable, existing on-premises infrastructure.

“VMware is delighted that for the first time, Oracle will officially offer technical support for Oracle products running on VMware. This is a win-win for customers,” said Sanjay Poonen, chief operating officer, customer operations, VMware.

These two announcements end a decade’s worth of fighting between the two companies. While the VMware-on-Oracle service is great for Oracle customers that need to have their VMware virtual machines close to Oracle’s cloud, the support agreement is a win for every joint VMware/Oracle customer out there.

Are you thinking about a Hybrid or Multi-Cloud Strategy, is DevOps your enabler framework of choice?