An opinionated piece about Kubernetes, KubeCon and our Cloud Native future. 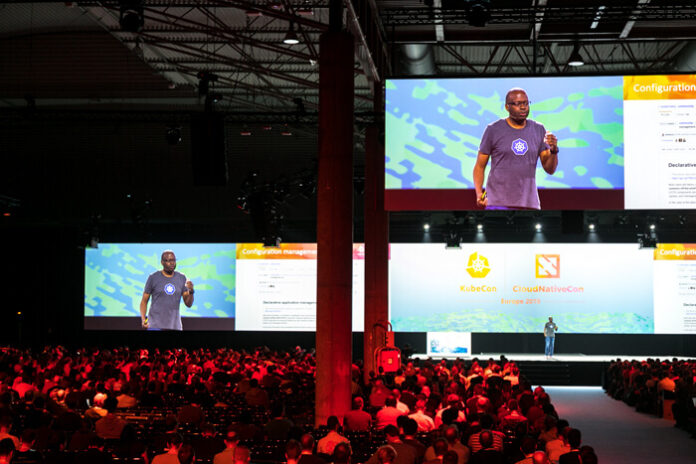 Another successful KubeCon EU edition closes and it’s time to wrap it up and share some facts and opinions (my own, obviously) about the conference, the experience and generally about where the Cloud Native Computing community is moving to.

KubeCon+CloudNativeCon is now firmly established as the technical conference of choice for most cloud native engineers, decision makers, community members and (many) vendors. Its deep technical content, emphasis on diversity and inclusion and relaxed atmosphere makes it an important and regular occurrence in everyone’s calendar. It’s also the moment where all Kubernetes’ Special Interest Groups (SIG’s) meet face-to-face to discuss results and plan for the next year.

First, let’s look at the logistics: although having about the same attendance of the last edition in Seattle, this KubeCon felt more spacey and there was a lot more room to talk, meet and relax and the outside areas were really a nice addition. For some, the distance between the expo area and the session areas was a bit too much, but I didn’t mind the walk. I clocked >15.000 steps a day! But I understand that for some this could be a barrier.

Kubernetes is here to stay

Kubernetes has been dubbed the “fabric of the Internet”, and it’s a fundamental driver for digital transformation and the innovation engine for the future infrastructure of both nimble startups and established enterprises. And as someone already put it, Kubernetes is a “platform to build platforms“. The question is not anymore “Why Kubernetes?” but rather, “How quick (and safely) can I get this thing running?“. Surely it deserves the best conference in the IT world? And surely KubeCon delivers!

For me the opening keynote from Dan Kohn really summarised the current status of the Cloud Native Computing Foundation and the clear dominance of Kubernetes over legacy orchestrators:

The last point I think it’s the most important: never before (with the possible exception of the Linux project) such diverse and active community has come together to deliver such world-class software. Dan’s talk emphasises the importance of building on prior art to advance human progress (with examples human evolution, calculus and environmental research). This is exactly the point and the strength of Open Source software development and the transformative power of communities, not only on software but also on the society at large.

Allow me now to write about some of the trends I spotted wandering the large halls of the Gran Fira of Barcelona:

Operational teams are getting less and less attached to single clusters and flexing their muscles in deploying several smaller clusters for specific purposes (ML, data processing) or individual teams.

This comes with the added benefit of becoming used to frequent updates, zero-downtime deployments, multi-region and multi-cloud setups (more on that later) and better resiliency. One could say that after commoditizing virtual machines, container adoption and managed services in the cloud are on the way to commoditize entire clusters.

Open standards and service meshes are on the rise

It’s a great and important milestone that two long-standing projects, OpenCensus and OpenTracing are now merged into the CNCF sandbox project OpenTelemetry; observability and traceability are quickly becoming a crucial component of any microservices architecture and their fate and adoption is strongly correlated with the adoption of Service Meshes.

And about the latter, the well-received announcement from Microsoft and other vendors of the Service Mesh Interface shook up the market quite a bit and reshuffled what seemed to be a market dominated by only one player. This should make for an easier and smoother adoption and a push for better features and performance (the fine folks at Kinvolk recently published an objective performance test of service meshes, and they were on the news also because they just hired Andrew Randall).

Enterprises getting the front stage at Kubecon is not a news (even banks were on stage before) but a notable mention goes to the multi-cloud journey of ABN AMRO presented on stage by Mike Ryan and Laura Rehorst (yes, as Kelsey Hightower showed last time with FORTRAN, COBOL also has a home in Kubernetes!)

As enterprise adoption picks up pace, the need for secure infrastructure becomes paramount and that shows in the rise of security focused vendors (I had my personal copy of Kubernetes Security signed by Liz Rice and Michael Hausenblas!) and the progress made in extending the Open Policy Agent (a CNCF project) with Gatekeeper; check out this talk from Riza Zhang of Microsoft and Max Smythe from Google). The general feeling is that Kubernetes is already a quite secure platform, but more work is needed to really lock down the platform and make security features easier to use.

One thing that I really never get is why SIG sessions have so little attendance and participation. I’ve been to a few and we were just a few people in the room.

I surely wish SIG’s will get more support from the KubeCon attendees (after all, you can watch all sessions afterwards, but nothing can replace the in-person interaction). So next KubeCon, stop by an SIG introduction or deep dive, you’ll thank me later!

Containers are the new Virtual Machines